This delicious sauce is very simple to prepare and, with a surprising depth and slight sweetness, pairs well with any type of game.

The delicate aromatics imparted by a little blossom honey and fresh cherries work best with seared duck breast and steamed purple sprouting broccoli tossed in a little butter – with the slight hit of port helping cut through the richness of the duck.

1) Season the duck breasts with salt and pepper then place them skin side down into a cold sauté pan with the garlic and rosemary. Place the pan over a medium heat and cook for around 8-10 minutes skin side down until the fat is fully rendered. Flip the breast and cook for a further 5 minutes or until cooked to your liking (I aim for an internal temperature of around 62C).

2) Once cooked, remove the duck breast and allow to rest. Wipe the pan clean (leaving a trickle of fat) and return to a medium heat. Add the shallot and fry for 1 minute. Add the port, cherries, chicken stock and honey and reduce for 3 minutes. Whisk in the unsalted butter and keep the sauce warm until ready to serve.

3) Carve the duck breast and serve with the cherry sauce.

This delicious flourless black forest roulade is naturally gluten free and packed full of flavour. Morello cherry jam and a little kirsch stop the cake from becoming too sweet whilst freshly whipped cream ensure it is truly decadent.

The flourless chocolate sponge is super light, so care must be taken not to over-roll to avoid crumbling.

2) Melt the chocolate and vanilla paste with a drop of water over a bain-marie. Allow to cool slightly.

3) Using an electric mixer, whisk the egg yolks and the sugar together until thick, creamy and pale in colour. Stir in the melted chocolate.

4) Using an electric mixer, whisk the egg whites until they form soft peaks. Fold the egg whites into the chocolate mixture. Transfer the mixture to the baking tin and level.

5) Bake the sponge for 20-25 minutes until risen and just set. Remove from the oven and cover with a sheet of baking parchment and a slightly damp tea towel. Leave to cool for a few hours.

6) Meanwhile, whisk the cream to a thick consistency with an electric mixer. Set aside.

7) Once the sponge has cooled, turn it out onto another sheet of baking parchment dusted with icing sugar.

9) Roll the roulade loosely from the short end nearest you – try to roll it round completely, but don’t worry about any cracks in the sponge.

10) Place the roulade on a large plate or tray and cover with tin foil. Transfer to the fridge and allow to set for at least 2 hours.

11) Unwrap and dust with icing sugar before serving. 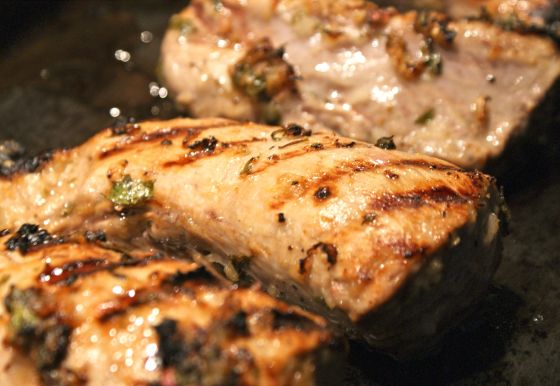 Looking for some recipe inspiration I stumbled across Bon Appétit’s recipe section – although I am a subscriber I never think to check their back catalogue. Big regret, there is an abundance of fantastic recipes just waiting, begging to be tried.

Big regret number two – never putting pork and cherries together before now. What a glorious couple. The marinade for the pork holds its weight with the sweet and sour salsa and when coupled with some watercress (fresh from the garden) the lime really sings through.

I think the marinade alone would work wonders on bbq chicken. And the salsa? Get a big bowl, a big spoon and tuck in. Delicious!

1) Marinade the pork for at least 15 minutes in half the coriander and shallots, 4 tbsp lime juice and vegetable oil.

2) Meanwhile, make the salsa. Combine the remainder of the coriander, shallots, lime juice with the cherries, chili and olive oil in a bowl. Season lightly and allow to settle.

3) Grill the fillets until cooked to your liking or alternatively seal on all sides and transfer to a hot oven until cooked. The lime juice in the marinade will caramelize quickly, so maybe best to use the second method.

4) Once cooked allow the fillet to rest for 10 mins, covered.

5) To serve, slice the meat and cover with the salsa. I served the pork with home-grown watercress which added a delicious peppery freshness.

A different slant on pork which makes great eating in the summer months.